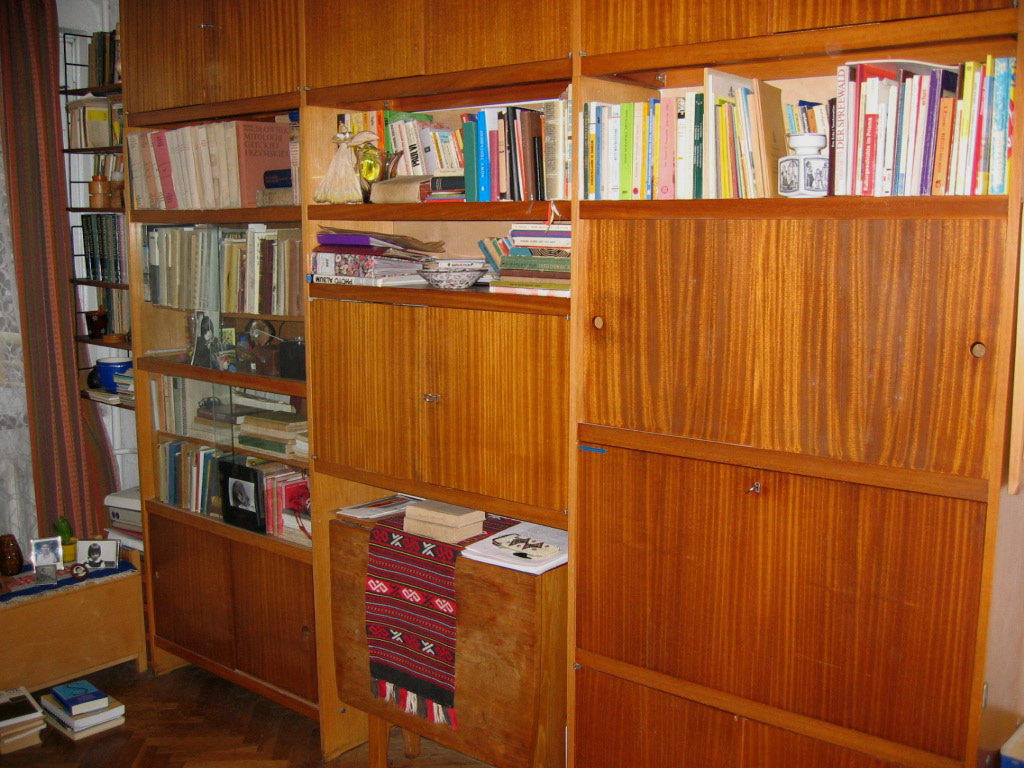 In 2002 we had a chance encounter with Polish film director Krzysztof Kieślowski’s first popular feature film, Amator (Film Buff), made in 1979. The main character in the film is a leading member of a factory-based amateur film club. Intrigued whether such clubs and filmmakers still existed, we made a few speculative research trips in the summer of 2002, inquiring into the existence and remnants of amateur film clubs from socialist Poland.

There has been a spectacular transfiguration of Polish political and cultural life since the introduction of the market economy in 1989. It is as if Poland has played out in a time-lapse film style the economic and cultural changes of ‘western’ Europe. Fifty years of social evolution, from a manufacturing to a service economy, has been compressed into just over ten years. Poland is a crystallization of the forces at play in the rest of Europe. It projects a service-driven, consumer-led future, while content to forget its industrial past and hide its manufacturing present. And yet, all the former state-owned industries, for example those generating power, refining steel or producing chemicals, play a central role in contemporary economic and cultural life. Clearly industry manufactures the goods and energy necessary to generate our material lives, and yet has simultaneously structured our experiences into ‘productive’ labour and unproductive ‘leisure’ time. But before the economic changes in Poland, even ‘leisure’ was organized through factory-sponsored clubs, various associations, sports facilities and even state holiday schemes. Out of this regulated network, perhaps the most popular clubs were those that encouraged the production of amateur film. With 16 mm film stock, cameras and editing tables supplied by the factory/state, a large number of clubs were created throughout Poland from the 1950s onwards. By the late 1960s there were almost 300 clubs in existence.

Out of this growing network, and in a mirror reflection of the professional media, film competitions evolved, prizes were awarded, and festivals were held on a local, regional, and eventually national and international level.

The passions of the amateur, enthusiast or hobbyist often reveal a range of interests and experiences generally invisible amid the breathless flow of the state-sponsored or professionally mediated. The enthusiast often works outside ‘official’ culture and its encouragements, frequently adopting a counter-cultural tone of tactical resistance and criticism.

During our trips to Poland we became aware that most of the factories that housed film clubs had closed, or the clubs themselves had disbanded. With help, however, we found a few former club members who were still active, and they, in turn, gave us addresses and telephone numbers of other members and clubs. We began to crisscross the country, visiting people’s homes, extant clubs and community centres, and with the aid of a portable editing device we watched hundreds of films.

It became apparent to us that the film club enthusiasts were inverting the familiar logic of work and leisure by becoming truly productive when pursuing their film-making passion and using work for their own, rather than the factory’s or state’s, intentions.

As we tracked down the films and their makers, we were astonished by their ambition. These were not standard ‘amateur’ films of family landmarks such as births, weddings and holidays, but were an aspiration to cinema. We saw extraordinary films that ranged from two-minute animations and wicked political satires, to short ‘experimental’ and ‘abstract’ films, from documentaries on family, village, city or factory life to historical dramas and ambitious features with great emotional gravity. There is an astonishing range of material, beautifully crafted and largely forgotten – or, more accurately, ‘doubly repressed’. Doubly repressed because the films are tinged with an ideological past incompatible with the ideological present, and because of their ‘amateur’ status they exist below the consciousness of ‘official’ cultural institutions of exhibition – museums and archives.

As a result of our research into these films, their makers and clubs, we found a huge selection of forgotten footage, usually in people’s homes, and sometimes literally under their beds. In 2003, joined by curator Łukasz Ronduda of Ujazdowski Castle Centre for Contemporary Art, Warsaw, we embarked on cleaning, restoring and digitizing as much of the material as we could find money to support.

As we worked on restoration and digitization, we began to develop ideas for a new project, a means of exploring enthusiasm through exhibition. We were aware of, and wanted to avoid the legacy of, artists’ use of ‘found-film’ material, where film footage is habitually stripped of its context and appropriated as the artists’ property. Through discussion, we realized our need to construct a social, material and conceptual context in which the films could be situated, all the while wary of succumbing to nostalgia.

Almost two years after the research began, the project was first made public in an exhibition entitled Enthusiasts, curated by Łukasz Ronduda at Ujazdowski Castle, in June 2004.

On our research trips we watched hundreds of films, in many extraordinary circumstances, often with former club members present. We became wary of imposing our own preferences and taste on the richness of the films themselves, and thus tried to become sensitive to their makers’ enthusiasms and hopes. What eventually evolved from screenings and discussions were three porous themes: Love, Longing and Labour. This enabled us to select the films for exhibition into three film programs, although in contrast to the conventions of artists’ use of ‘found footage’, the compiled films were left complete, with their original music and fully credited.

Our emergent themes seemed better able to curate the films into comprehension than the arbitrary violence performed by sorting the films into the genres usually deployed, such as feature, documentary and animation.

There is an astonishing growth in museums and in archives and data-banks of images, sounds and information. These new, emergent forms of archival capital exercise an increasingly powerful grip on culture and its reproduction. The problem with most existing public archives is that all creative work is born into copyright; every image, text, film or sound is automatically designated as the property of its apparent author (until death plus seventy years in the UK). Copyright is founded on the right of exclusion: what is contractually mine cannot be yours. Through the fixed term of exclusion, copyright removes creative works from the public domain and denies the legal possibility of creative re-use of the work by others, except with prior written permission. Now, while there is logic at work between relationships of owners or authors and physical artworks or artifacts – a logic of scarcity and a bounded relationship between people and things, this logic dissolves when applied to media made for reproduction, like film, or immaterial goods, like ideas or information, or previously distinct media translated into a digital code that is endlessly replicable at negligible cost with no appreciable loss of quality.

Most public film and media archives are built from donated material from public broadcasters or film agencies, or gifts from amateur film-makers. These gifts are usually accepted with a stipulation that the copyright, or its management, is assigned to the archive. Some media archives then attempt to turn limited reproduction rights into a revenue stream, selling on rights to broadcast media conglomerates for extraordinary fees. These fees are often well beyond the reach of the public who fund the archive and donate its holdings.

Effectively, our moving-image cultural history, our film and broadcast culture, is being expropriated from the very people who paid for its production. It is like charging thousands of pounds to visit a museum exhibition.

Archives, like collections in museums and galleries, are built with the property of multiple authors and previous owners. But, unlike museum collection, there is no imperative within the conventional logic of the archive to exhibit, display or interpret its holdings. An archive designates a territory and not a particular narrative, but perhaps the archive, too, may be constituted as a creative space for engagement. The material connections it contains are not already authored as someone’s – for example a curator’s or artist’s – interpretation, exhibition or property; rather, it is a discursive terrain where interpretations are invited.

Through our founding of Enthusiasts: archive as an artwork, we intend to challenge creative practices, to replace exchanges facilitated by frustration and restriction with those of collaboration and generosity. We want to reanimate the public function of archives, collections and exhibitions in an age characterized by relentless privatization, and to initiate new exhibition practices. Practices where, as artists, our ‘creativity’ is not founded on the dominance of the visitor, and where the ‘studio’ is no longer privileged as a space of creative production to the detriment of the exhibition, which is too often imagined as a space of passive spectacle and consumption. Instead, we attempt to collapse those spaces and participants, so that exhibition is reconfigured as a conscious site of creative exchange for the collaborative negotiation over the ‘making’ and remaking of the work of art.

Pursuing this project, we recognized the need to locate our work within exhibition institutions, to utilize their authority and resources, and to work with the audiences for contemporary art that they convene. And yet our aspirations for Enthusiasts: exhibition and Enthusiasts: archive is to test and exceed the institutional grip on culture and its reproduction. Our artworks are made from and conceived as a nexus of all the forces made possible through the practices of exhibition – simultaneously aesthetic, material, political, financial, institutional and discursive.