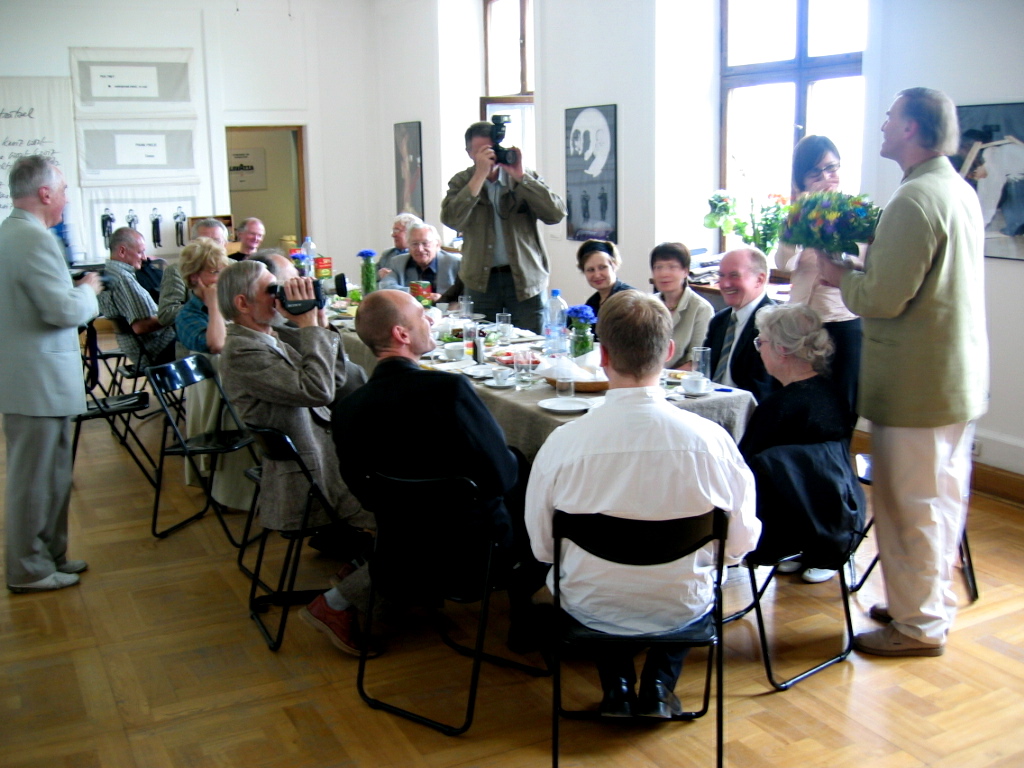 The films in the Labour programme organised by Neil Cummings and Marysia Lewandowska attempt to open a relevant space for a forgotten voice; the forgotten voice of labour.

Imagine workers, producing movies after hours just for themselves, driven by enthusiasm and not by money. Could it really have been pure enthusiasm – or might it have been politically motivated? Was it an altruistic exchange with a possible future audience – or a desperate longing for recognition?

The notion of labour traditionally encompasses a chain of negative cultural and political associations. Labour is founded upon the exertion of the body: on pain, boredom and necessity. Following the work of French feminist philosopher Julia Kristeva, the field of economic activities described by Labour could be positioned as abject; suggesting that a portion of society’s nature or identity is rejected as repulsive and threatening.

However, these worker filmmakers seem to have ignored the philosophers and to have contested the rejection of their world. Although unable to present themselves to a wider cinema-going public, they produced beautiful films to represent their experiences rather than to gloss over the imperfections in their lives.

As a result, they engage intimately with their working conditions; just like the old woman in The Earth, they connect respectfully and lovingly with their physical, organic and material surroundings. In the films, things are occasionally simple, people are often bad, life is difficult and dirty, and sometimes there are no alternatives for certain situations. “I think it’s gonna be good if you see this…” says the narrator in the film People from… as he introduces a gang of ditch-diggers. However, the means of expression employed by the filmmakers far exceed the limits of documentary realism. They often use paired-down representations that focus on a particular moment or concentrate on minute details like the beautiful, Japanese-painting-like final frame of a blossoming tree in Close to Hell or the ritual laying of an asphalt road in Sisyphus. In Modern Symphony, a portrait of a steelworks, the most obvious elements of harsh reality such as noise, heat or dust are eliminated in favour of experimental imagery, and non-linear editing accompanied by avant-garde music.

These films inconspicuously transform homo laborans into homo faber. As in Symbiosis, the filmmakers construct reality – as in from Velazquez’s Las Hilanderas, c. 1653-4 – by literally weaving its constituents together. Like a mirror, these films provide their makers with the critical reflection they were deprived of in other social spheres. Cultural production simultaneously offered a space of self-presentation and opened up a window onto their world.

In an interview Marysia Lewandowska described the phenomenon of enthusiasm as “A kind motivation, a force independent of professional obligations, something originating in completely different needs. A drive which is not dictated by financial gain […] it’s a result of hidden passion, and a need for self-realization”. For a long time – from slaves, journeymen, industrial workers and post-industrial employees – labour led a fight for the right to feel such sovereignty. Increasingly organized, Labour demanded political autonomy and freedom from degrading regulation and endless discipline.

And here is the crux. In the face of an economic recession which closed the long period of post-war welfare prosperity, capital engaged in a search for new and more effective ways to make profit through labour. Traditional, top-down management hierarchies for increasing productivity were no longer efficient, nor legitimate (particularly after the widespread labour unrest of ’68). Capital ingeniously integrated this desire for greater autonomy into its management methods by appropriating the phenomenon of empowerment itself to realize its objective. In the era of deregulation – creativity, autonomy, self-initiative, enthusiasm, responsibility, flexibility, and participation – all excluded from the previous management system (whether early capitalist or socialist) are transformed into the most useful tools to increase productivity and cut labour costs. It seems that today, at least in the developed world, the exploitation of enthusiasm – as an index of creativity – has become an orthodoxy. One could even suggest, following the work of critic and activist Brian Holmes that “Art or more broadly creativity has become the linchpin of the workfare system”. In this way, labour’s collective emancipatory drive merely prompted the opposite, deregulatory drive in capital.

But what are the consequences of such a development? In the framework of the previous welfare regime, workers were guaranteed a certain amount of time free from work. There was a clear demarcation between leisure and time controlled by either the state or a private employer. As a result, it was easy to single out the phenomenon of ‘enthusiasm’ or free time and to harness them for political and economic ends. Now, labour has dissolved into irregular and unpredictable activities; space has been affected in a similar way, working from home eradicates the last shelter protecting employees from management control. Job descriptions are neither sharply defined nor imposed from above; in fact we are no longer merely employees but ‘partners’ or ‘consultants’, ‘stakeholders’ or ‘freelancers’ invariably with an increased workload and decreased job security. Everything has been re-organized flexibly in order to externalise all redundant costs and to enable business to escape from social responsibilities. Today’s so called workfare regime implies the total mobilization of the working population at all times and in all places.

In the contemporary economic (but also political and cultural) context, enthusiasm suddenly loses its unambiguous character and becomes the foundation of a new kind of economic despotism. Neil Cummings characterizes amateur filmmakers as those who “often invert the logic of work and leisure, becoming truly productive when pursuing their passions and using work for their own rather than the factory or State’s intention”. At the same time, enthusiasm has become appropriated and thoroughly instrumentalized. To borrow Antony Hudek’s words, enthusiasm is no longer “close to the positive pathological frenzy of revolution”.  Enthusiasm has become a cold and calculated management strategy used as a soft tool both to increase productivity and to perform as a safety valve that diffuses potential charges of exploitation.

How can we define enthusiasm if there is no longer a separation between work and leisure? The traditional relationships between clearly differentiated actors – labour and its management – were rigid and hierarchic but at least the freedoms and responsibilities of each side were clear. Power and authority was obvious, and as such, much easier to confront. Once the nature of work and leisure blurred and organizational hierarchies were flattened, authority and control appeared to disappear. The problem is however, that power did not evaporate from our relationships, it has merely changed its nature, becoming more subtle, flexible, and ultimately more difficult to discern or resist.

So how are we to reclaim enthusiasm? How can we save the political dimension of autonomy and creativity from an economic and political system that eagerly appropriates its forms and effects? One option suggested by Brian Holmes is that “there is no solution for a leftist cultural position within a market society, but instead an ongoing tension between the actors inside and outside the institutions at the oft-crossed limits of the breaking points”. This tension defines modern critical and confrontational practices and where they start to function as circuits of struggle which are – as Michael Hardt and Antonio Negri would say – informal and dispersed but recurring in a steady rhythm.

However, it is not sufficient merely to adapt to the new modes of an adversary’s activities, especially after the very notion of enthusiasm has proved so susceptible to political management. Political philosopher Boris Buden notes that “Power, or rather the current forms of domination today, are just as fragmented, plural, hybrid, in short just as flexible, as the forces that attack them”. He also warns that “hybridization alone does not result in liberation. (…) Hybrid resistance must not become a secure area of retreat for those in revolt, an illusionary space of an originary innocence”. Today’s creative resistance, if it is not to be easily appropriated by the forces it opposes, must be most of all reflexive, autonomous and “deliberately inefficient”.

There are no easy and unambiguous political resolutions after enthusiasm lost its virginity; creativity must enter a new stage. The films selected for the Labour programme succinctly encapsulate this very question. For example, painful and repetitive labour, as represented in the animation A Song for the Worker at the Morning Shift, seems accepted and natural. Only the use of newspaper collage and the monotonous reading of Edward Stachura’s heartbreaking poem (which gives the film its title) expose the critical intentions of the filmmakers. As the narration develops, work – as the fundamental aphrodisiac of the socialist regime – reveals its ominous face as an instrument of total control in a manner that is extraordinarily analogous to the evolution of contemporary workfare regimes…. A similar and ironic approach can be found in the deceptively simple animation Together. Here the film hovers between a celebration of collective action and a critique of conformism.

Many aspects of the amateur filmmakers’ activity resemble contemporary forms of protest. They managed to establish voluntary and non-hierarchical collectives whose members’ roles were constantly changing: from cameraman, lighting designer, director, actor, scriptwriter, etc. Participation was considered as a defining value and everybody enjoyed a relatively unlimited degree of autonomy. Perhaps most importantly they used the subversive language of art as their major form of expression. It enabled them to confront successfully the official system with their own autonomous and spontaneous enthusiasm and thus to reveal – and to actively revoke – the ideologization of the former.

Does this mean that the filmic voice of the amateur filmmakers is really political and able to transform reality? As Boris Buden said, “what we are concerned with, however, is not a correct description of this world but rather changing it”. The crucial question is whether their perception of the world, of the hiatus between what is and what should be, stimulates the potential to alter that world.

A public space emerges every time “men act together in concert” but how can we differentiate between the administration of enthusiasm and real sovereign empowerment? One possible answer comes from the philosopher Jürgen Habermas, and his discursive model of the public sphere. Habermas suggests three new possibilities for the formation of a public sphere: firstly, that general norms increasingly emerge through consensual practices; secondly, that individual identities are ever more dependent on self-reflexive and autonomous attitudes; and finally, that cultural practices and traditions are established by a progressively creative process.  As participation in public life has shifted from a narrowly defined politics to a broad range of cultural activities, the responsibility for constructing the sphere of the public has also moved from powerful institutions to individuals themselves.

Describing the abstract form of the film Modern Symphony, the narrator explicitly states how the experimental process converges with the production of pig iron. The effect of working directly into and upon the film emulsion with splashes of colour, light and various graphic shapes distances the audience from the violent production process. At the same time, the additional layer of film imagery reveals a completely different reality that shows the logic and beauty of the film itself. And this is the solution. By acting together in concert, the amateur filmmakers mastered the process of constructing their identities and their representation in a perfectly self-reflexive way. To quote Benjamin Barber, they became “public without being coercive, voluntary without being private”.